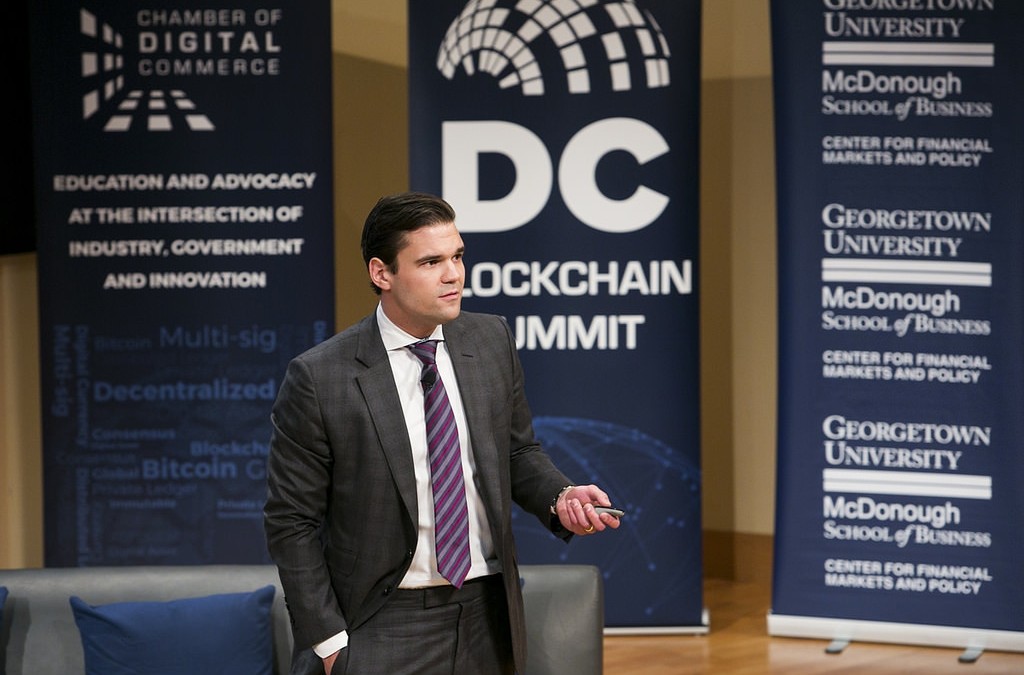 Alex Tapscott talks about leadership and governance in the Blockchain Revolution during the DC Blockchain Summit:

Good morning, everyone. My name is Alex Tapscott. I am the co-author of Blockchain Revolution and I was invited here today to help set this day up for you. I’d like to start by discussing a little bit about why we’re all here. Don spoke a little about the different projects that we’ve run over the past couple of years, each of which appears as a chapter in our upcoming book Blockchain Revolution.

He spoke about the prosperity opportunity and challenged us all to summon the leadership to lead this revolution in a positive way and you’ll notice that of all the different things that we’ve covered, it’s leadership and governance that we finished with. Because leadership and governance is critical to all of this. And it’s critical when nurturing and developing an important global resource and that’s really what blockchain technology is. If we do this right, it has the potential to change business models and upend the old order of economic affairs. If not, it can fall victim to any number of major showstoppers and there are many, many things that can go wrong that could prevent this from reaching its full potential.

When we talk about governance we’re not talking about regulations or governments. At least not exclusively. Regulations are about designing laws to control human behavior, to control behavior. Governance is about stewardship, collaboration and common interests. This is nothing new. In fact, we’ve got a great precedent for it – it’s called the internet.

About 20 years ago, the internet underwent its own governance awakening, which led to the foundation of the whole bunch of very important organizations – the Internet Engineering Taskforce, ICANN, the Internet Society – so that today the internet is governed by what would have previously been thought of as an impossible collection of individuals, civil society organizations and companies working with the tacit and sometimes active support of nation states, no government controls the internet although some have certainly tried in the past.

What’s amazing about it is that it works. It’s achieved legitimacy through consensus making, through openness and through meritocracy. Which is why I think this event today is so important. And the work that the Chamber is doing is so important. Because today you’re going to hear from many of the key stakeholders in this burgeoning ecosystem. You’re going to hear from entrepreneurs, developers, law enforcement, leaders in government, business, academia and law, all who are going to spell out their vision for what this future looks like. Certainly this ecosystem is rich with talent, rich with leadership potential. What we need now is governance and when we talk about governance we’re talking about multi-stakeholder governance.

This isn’t about hierarchies or bureaucracies, we’re not trying to add another layer of government on top of this. It’s about self-organization, it’s about collected self-interest, somewhat similar to the analogy that Don gave about the murmuration.

or the first time in human history we actually have a mechanism by which to do multi-stakeholder governance. In our research over the past few years we’ve come up with a label for them, we call them global solution networks. They’re out there without the support necessarily of nation states, or controlled by nation states, they’re out there solving global problems. It turns out, there are 10 types. I’m not going to go through all of them but I’m going to give you just a quick story, which is that last week, some of you might not be aware of this, but there was an event that was held in Miami, it was called the Satoshi Roundtable. It brought together a whole bunch of people in the bitcoin space to come to figure up some key technical standards. I’m sure if any of you are even somewhat familiar with what’s going on in this space, you’ve heard of this block size debate, which has caused a lot of frustration and a lot of rifts in this sector.

Unfortunately, they never really got around to discussing the block size debate because they couldn’t agree on how to agree. They didn’t know whether or not to do majority rules vote or whether or not to do a consensus, and they defined consensus as basically every single person in the entire community agreeing on one proposal or the other. We define consensus differently as the absence of any sustained opposition and some kind of common path forward that works mostly for everyone, but the point is this was a conference to determine key technical standards about bitcoin protocol, which is the biggest blockchain in the world. Most of the people I’ve spoken to over the past few days didn’t even know this was happening. At the conference they had no mechanism nor organization to come to any concrete conclusions. It was a failure.

We need standards networks to come up with key foundational issues like the block size but also to come up with technical standards for smart contracts, for autonomous agents, for financial services, for a whole other slew of applications which are going to come about from this technology.
We need policy networks to deal with issues of privacy, financial regulation. The absence of any input from the private sector or government, you’re going to have regulators who are going to just create rules, and they’re going to create rules which might be harmful.

You need advocacy networks and watchdog networks to help support the protection of individual consumers, and also to make sure corporations and governments don’t overreach. Which is why the work that’s happening today at the Chamber is so important and why this event is so important. I encourage you to check out our book, Blockchain Revolution, and also to think about how you fit into this ecosystem, and what type of leadership role you can take on in it. The stakes are high and we need your help, so please, join us.