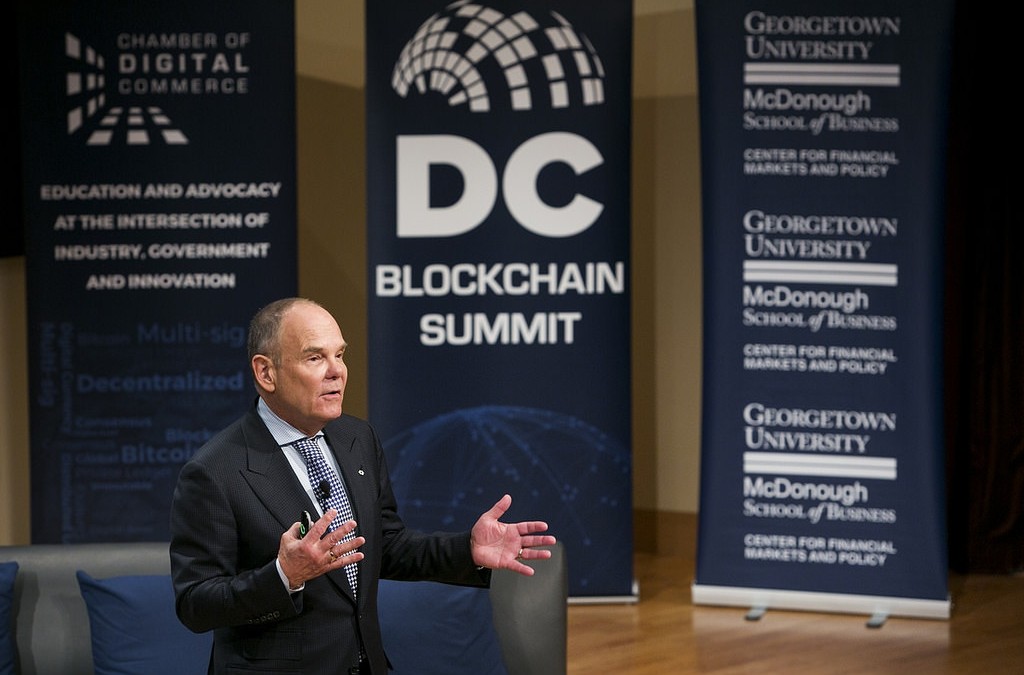 Don Tapscott discusses the internet, the economy, and the blockchain at the DC Blockchain Summit:

Matt Roszak: Good morning, DC. My name is Matt Roszak. I am on the advisory board of the chamber of digital commerce. I have also been a venture investor in this space for the last 3 years, investing a lot in the bridges, roads and tunnels of blockchain and recently cofounded a company, called Bloq, which is in the enterprise blockchain software space with Jeff Garzik.

It’s my honor and privilege to announce today’s first keynote speaker, Don Tapscott. Don is one of the world’s most prolific speakers and authors on innovation and its impact on society, industry and government. He’s authored/coauthored 16 books, including Wikinomics, Digital Economy—this is that guy—he’s on Thinkers 50, #4, so I think the criteria there is you have to be one of the world’s most greatest thinkers and you have to be alive so thanks for meeting both criterias there. His latest book, coauthored with Alex Tapscott, is called Blockchain Revolution.

We’re all here together because the concept of bitcoin/blockchain – it’s not that intuitive when you hear it for the first time. You have to listen to stories. This is a forum and a platform that today is about storytelling and we’re going to hear a lot of great stories. Technology is sometimes hard to understand at first blush. You need more stories, you need remarkable stories, repeatable, sharable stories. If you could imagine trying to storytell about personal computers in the late 70s or the internet in the early 90s—it needed storytelling. Blockchain revolution is chockfull of storytelling, stories that we can repeat and understand ang get our minds around this new technology. Please help me welcome Don Tapscott.

Don Tapscott: This is a very important event and an important time in history because once again technology genie has been released from the bottle, summoned by an unknown person or persons at an uncertain time in human history. This genie is now at our service to get another kick at the can, to rewrite the economic power grid and the old social order of things. Let me explain.

The first—by the way, if you’re tweeting, I’m @dtapscott. Do tweet away and this is being livestreamed apparently too. The first era of the internet was great, and it brought us lots of good stuff. We had the rise of the web, the social web, the mobile web, the internet of things, the early days of that, drones, machine learning is a big topic, even now the cloud, big data is a new asset class. And all of these technologies have done many wonders for us. But when you look at the bottom line of what’s been the impact on society and our economy there’s actually a troubling conclusion.

I was humbled when I had to do a twentieth anniversary edition of my book The Digital Economy which came out in ’94. They said this was the first bestseller about the web and business. I had outlined a number of things that could go wrong. I said, it’s possible that technology will not contribute to prosperity but rather it would be captured by powerful forces, the benefits would be asymmetrical and would result in social inequality.

I said, it’s possible that we’ll see growth in our economy but not commensurate job creation. I said we’re going to create this massive new asset called data, but it’s possible that it would be taken from us, the creators, and it would be captured by a small number of powerful companies that will create great wealth with it. And not only preventing us from monetizing this data, but it would be used against us to undermine our privacy. And this could also happen with governments who could create a surveillance society. Well if you look around today, all of this is happening. This is the first time in modern history where the 51st percentile is actually declining—how can this be?